This article presents to you 3  ancient mysterious inventions. Scientists and researchers have not been able to decipher how these massive architectural structures and gadgets were made. Furthermore, they have also not been able to understand the purpose of these inventions. Lastly, they have been made in a time period in which, according to explorers; advanced technology to build theses, ceased to exist.

1. The Iron Pillar of Delhi 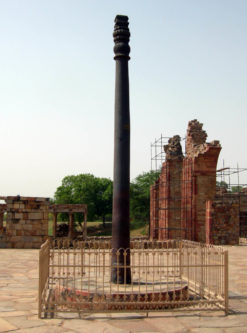 Located in the Quwwat-ul Mosque of Delhi, this iron Pillar is about 24 feet high, is 98 percent wrought iron and is approximately half as heavy as an anchor of a cruise ship, i.e. more than 6 tonnes.

The ancient pillar is estimated to be made 1,600 years ago in the 300’s, in Madhya Pradesh, using forge welding. According to a popular translation of the Brahmi script upon the pillar, it was made in the honour of Lord Vishnu. Based on the time in history the pillar dates back to;  it is presumed that it was built for a King of the Gupta Dynasty; probably Chandragupta Vikramaditya. It is only a 1000 years ago that the pillar was brought to Delhi. An iron pillar that old should have fallen to dust and blown away with the breeze long before now. Though we may know when and where this massive historical/ ancient pillar was made, there are a number of questions that are still left unanswered.

Why was the pillar built and who moved it is still unknown. Some believe it was a Sundial, while others suggest that it was a flagstaff for the king mentioned in the inscription. We still don’t know!

The Quwwat-ul Mosque was built much after the iron pillar in, 1192. The mosque is in ruins; however, the historic pillar still stands tall, with only small amounts of rusting. The rusting is a comparatively recent phenomenon and does not make the pillar’s condition any less mysterious. Since, it should have ceased to exist long before.

There are no written historical records regarding the substances used in the iron pillars construction. Some say climatic conditions; low humidity is the reason the pillar is intact. Skilled labourers and the quality of the material of the protective layer are other reasons why the ancient iron pillar has failed to rust. While researching about this protective layer, the term “Misawite” has surfaced very often. Since this term only appears in historical texts related to the pillar, we are still unaware of the contents of this quality substance. Therefore, it is hard to believe in such a claim.
Source

They Baghdad Battery or also known as the Parthian Battery resembles an earthen pot. König, an archaeologist discovered these artifacts, either in the basement of the National Museum in Iraq, or in an excavation, in the year 1936. His research indicates the artifacts to be from Mesopotamia, from the Persian Empire Period (200 BC).

These articles that appeared to be mere earthen pots, were actually suggested to be batteries. The jars were made out of terracotta, has a thickness of 130 mm and was 5 inches tall. The jar had a half inch opening, inside which a copper sheet cylinder with an iron rod inside it, was found. The copper and iron was separated with bitumen plugs.

What has surprised scientists, is that these vessels, predate Alessandro Volta’s 1800 invention of the electrochemical cell by more than a millennium. These batteries have been tested have generate 3-5 volts. The power generated may be minuscule, however, what is important here is that, if they were made to ‘power’ ‘something’.

This discovery of this invention has raised a number of questions; beginning from, were civilizations in the historic period not as primitive as we think of them to be? Where did they gather the knowledge for this? How did they manage to make these inventions? What was the primary purpose of it? Did they connect a number of batteries to power something massive? Since no wires have been discovered, which could connect the batteries, this cannot be established. However, archaeologists have discovered copper utensils from ancient Sumer, which were electroplated with silver. On the basis of this discovery, researchers suggest the batteries were made for electroplating utensils. In addition to the aforementioned questions, other questions relating to the existence and contact with extra-terrestrial visitors have also been raised.

Nevertheless, no theory formulated has been able to confirm the purpose and provide answers to questions raised by this mind-boggling ancient invention.
Source

What are these lines?
They are drawings or geoglyphs, (i.e. a large design or motif, generally longer than 4 meters produced on the ground and typically formed by clastic rocks) found in the coastal area of Peru. It is the enormity of these geoglyphs that pulled our attention; they are spread across 450 square kilometers.

What do they look like?
Thousands of them are scratched on the ground in the shape of natural creatures, as well as creatures made from human imagination. Spider, hummingbird, monkey, lizard, pelican, killer whale, plants, trees, flowers and geometric figures have been illustrated in the 450 square kilometer patch.

The time in history that they date back to
A wide range of lines dates back to a time between 200BC- 500 AD. This is the time period in history when the Nazca Tribe inhabited this region.

Who made them?
Research suggests, that these lines were made by the Nazca tribe; an ancient prehistoric culture. It is also stated that with the use of their engineering skill and techniques they were building an irrigation system to draw water from underneath to the surface of the earth in order to irrigate.
Cahuachi, a settlement in the area; a place of ceremony, contains more than 40 mounds and a few pyramids made of adobe, which in some way support the aforementioned claim.

When were they first found?
These lines were first discovered and studied in 1927 by Toribio Mejia Xesspe on foot. The air traffic in the region increased a few years later in 1930’s and these ancient lines, became a tourist attraction. It is only a myth that these lines can be only seen from an aerial view. All of the 1500 drawings found in the Palpa region can be spotted from the ground as well.

Famous theories
Ancient Nazca culture is pre-historic, hence there are no written records that explain why these lines were formed. The fact the entire figure could be clearly seen from the aerial view and some of the line represent constellations; they lines may have a link to the heavens. Another theory suggests its connection to pilgrimage; with the lines leading to a sacred place like the Cahuachi and the pyramids. While others say the lines have a connection with water, irrigation and water-based rituals since water was hard to get in this desert region.
Source

How did the pre-historians make these, without an aerial view or advance technology and, machinery and why were they made is still a mystery, however, these are inventions that leave us stunned due to the technique and skill it has been made with.

Also read about Remarkable Inventions by School Children.
Subscribe to Engage Learning and improve the way your child learns.